As of today I have come to an agreement with myself to finally accept that I can not have more than 10 characters on MAL.  Prior to today, it deeply saddened me at the thought that I could not include all of my favorite characters that I chose out of each anime that I’ve watched, however, today I overcame that obsession with characters.  I decided to choose my top three favorite characters…for the month.  I would never disregard all of the potential future candidates, that would be cruel.   Therefore, monthly I will be announcing the three lucky characters who have managed to catch my eye in the anime that I watch.

First off for the month of June I have chosen someone whom I sympathize greatly with.  A man who has been friend zoned countless times and had his true love plan to marry a prince, who could this be?  Obi.  Obi is rather mysterious and enters the anime, Snow White with the Red Hair, out of the blue, however, the moment he entered he caught my eye.  Obi first entered the anime by shooting an arrow to startle Shirayuki with unclear motives in mind, but then later on decided to become the prince’s messenger.  He proves to be very loyal to Prince Zen and is pretty handy with weapons.  The moments where he follows Shirayuki to a neighboring kingdom to keep watch over her pulled at my heartstrings.  When she got kidnapped and he got injured trying to protect her it was heartbreaking.  Once he woke up he chased right after her.  Obi will forever be a favorite of mine, he makes me wish that there was a third season to the anime; two was not enough.

Next up for this month, I have chosen Sougo Okita from Gintama.  When I first watched Gintama a couple years ago, I did not enjoy it for some reason.  Recently, I tried watching it for the second time and now I find it to be interesting.  I do not know what was wrong with me before, but how could I ignore an anime with a character as humorous as Sougo?  His straight forward personality, his face mask he wears as he takes naps and his lack of care for Hijikata, his higher up, are very entertaining and comical moments to watch.  Who else do you know that tries to kill their partner every chance they get?  I bet they can not top Sougo and his bazooka.  The Shinsengumi truly have some high ranking odd balls, Sougo may not even be problematic in comparison to their commander, Kondou.

Last but certainly not the least adored, Ikuyoshi Sasaki, an underrated character from Super Lovers.  Within the anime, Haru gains numerous followers due to his hosting career and Sasaki, another host, is one of them.  Sasaki is a friend of Haru’s and certainly wants to be recognized as one.  Sasaki almost reminds me of a helpless puppy hoping to get noticed by its owner.  He quit his job to run the café with Haru once he decided to move away and start it up.  Sasaki is truly admirable.  He is often portrayed as a scatterbrained and a cry baby, yet there is a funny side to him.  My favorite moments in this anime involves the moments where he realizes Haru and Ren’s relationship as brothers is not normal, two of which you can see below.  Also, he tends to make frequent appearances in the anime, although, not for long periods of time.  Sasaki, you may be labelled as a supporting character, however, you will always be a main one to look out for in my heart. 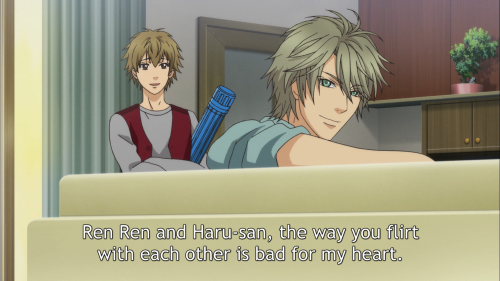